I have always hoped for the day when the news would arrive that Indie Godfathers, Pavement were reuniting.  I often consider going to Mark Ibold’s place of work (he works in a resturant in NYC) and trying to talk to him  about ‘How we can rebuild Pavement’. Well, I ALMOST had it this time!

Pavement reunited at  Bob Nastanovich’s Nashville wedding where all members were in attendence. Stephen Malkmus, Ibold, and Steve West took to the stage as Malkmus performed “Come and Get Your Love” and The O’ Jays “Love Train.”  WOW. That must have been a site to see. By the end of the night the Pavement boys were onstage, not performing with each other, but just there together. I guess its been too long since they’ve played together to play actual Pavement songs. Whether or not Pavement will ever actually reunite is up in the air, but fingers crossed! Ibold we need to talk…..

A short clip of Malkmus Performing at Bob’s Wedding 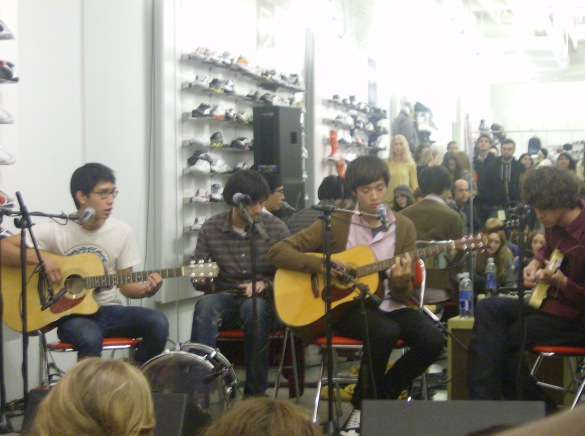 The first song the band performed was an alternate version of ‘Patient Patient’ called ‘Doctor Doctor’,  which makes the song a bit darker, but nonetheless still beautiful.  The second song titled ‘Worth the Fight’ was a track that was left off of ‘Talking Through Tin Cans’ because the band didn’t feel it fit well with the other songs. Maybe a studio version of the song will make it onto the new Morning Benders record.  The final song the band recorded for Daytrotter is ‘Nothin’ in This World Can Stop Me Worryin’ Bout That Girl,’ a Kink’s cover which the band started playing around with the night before. This is one incredible cover, but hey, The Morning Benders are an incredible band.

It has been less than a year since Conor Oberst and the Mystic Valley Band released their first record. Actually its only been about 6 months as of right now. We all know that Conor is one of those guys who just churn out the tunes, but I don’t think any of us were expecting a follow up release so fast.  The band already displayed new songs on their last tour proving that they were still in the writing mode. Oberst and the boys will release ‘Outer South’ on May 5th on Merge Records, and yes, it has 16 tracks of new material which includes “Nikorette”  which they performed on Conan.  No doubt it will sound a lot like the first record, but that is what we love about it. Anything that Conor touches is pretty much gold.

Conor Oberst and the Mystic Valley Band are stopping at Coachella this spring, and have announced a few West Coast tour dates.

This past Sunday, February 15, The Miniature Tigers dropped into the Mercury Lounge in New York City and were welcomed to a packed venue. The word about the Mini T’s is certainly spreading, and the Modern Mystery crew couldn’t be happier and more excited about this fact. The band who is currently on the road with Mr. Ben Folds, have been doing a few one off shows as headliners when they have free time on the tour.

The Miniature Tigers play like old pros. They are flawless onstage and certainly astonishing to hear. Charlie Brand’s voice is remarkable, and hits every single note, soft or loud. Darren Robinson (guitarist from the hiatus Phantom Planet) is a nice addition to the band almost like he has been playing with them from the start. Lou Kummerer was stellar on bass and tamborine duties, and drummer Rich Schaier is a total badass when it comes to drumming. He is also incredible on the keys and harmonies as well.

The band had everyone in the room dancing and I think we can all agree that The Miniature Tigers are one of the most fun bands out there. The band played some of my personal favorites such as ‘Cannibal Queen’, ‘Tell it to the Volcano’ and ‘Last Night’s Fake Blood’ which I was very excited to hear. Not only did they play a good amount of songs from ‘Tell it to the Volcano’, which came out on CD officially yesterday, but they also played a few new songs. New songs already? Yes! I can’t wait until The Miniature Tigers comes back to New York City again! Its a show you surely do not want to miss. Check them out when they come to your town. The band will be on the tour non stop until the end of March.

You can check out their tourdates on their Myspace.

More pictures from The Miniature Tigers at the Mercury Lounge after the Jump.

I’ve never been a fan of Lily Allen. Not because  I didn’t like her music, but basically because I never had an excuse to listen to her. Sunday night while coming back from The Miniature Tigers show (review up this week!), I picked up a copy of Spin to read on the train ride home. It was the only half decent thing lying around. Miss Allen was on the cover and I thought I’d give her a chance.

Lily opened up about boys, drugs and alcohol and how she was trying to ‘better herself’. From there I kind of grew a respect for this sad girl trying to make her life normal. Yesterday I had caught her video for ‘The Fear’ which is off her newest record ‘Its Not Me, Its You’.  Both video and song are very intriguing. ‘The Fear’  seems like it ventures away from the last record and I must say, the song sounds very sweet. The video matches it with pastel colors, dancing boys and balloons. Lily Allen, I think you’ve got a new fan.

Watch the video for ‘The Fear’

Yes, Conan O’Brien moving to The Tonight Show has its ups and downs. First off, we get him at an earlier time. Nice. But the bad news is that he is moving to California to do the show. Bummer. Conan is doing a nice little send off on March 2nd with his last musical guests and friends, The White Stripes! Conan and the band have a pretty good history together. They did a week of performances on the show a few years back and Conan appeared in their video for ‘Denial Twist’. I guess they are a match made in heaven. Here’s to Conan and his new beginnings.