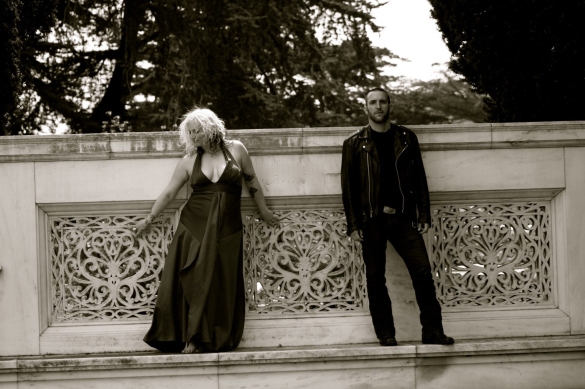 Sit Kitty Sit are launching off their latest tour at a city near you! Kicking off the start of 2015 with gusto, the San Francisco rock duo is taking their sound to the masses. San Francisco’s SIT KITTY SIT is Kat Downs and Mike Thompson. The duo, who create an undeniable pop/proggy piano and drum sound, has been described as Dresden Dolls mixed with King Crimson, & Fiona Apple. Known for consistently thrilling audiences with their energetically intense live performances, the group produces addictive rock n’ roll – with only two people, and not one guitar in sight.

The group’s latest album, Everlasting Fire, has been acclaimed by fans and critics alike. The record, based entirely on “Dante’s Inferno,” brings a storyline to the album, which also showcases the extensive versatility of Downs and Thompson as a team. Spanning 7 different genres, there is something for everyone.

Liz Graham is quite an accomplished songwriter in her own right. Hailing from New York City, the mecca of music, Graham dabbles in the welcoming sound of Adult Contemporary and Triple A. For fans of artists such as Ryan Adams, Ingrid Michaelson and Sarah McLachlan, Liz Graham is right up your alley. She’s sold over 10,000 records, played Lilith Fair, and has even reached the music charts such as CMJ.
Recently Graham has released her infectious new single, “Charcoal on the Canvas.” The song is said to be about wanting to get to know someone on a deeper level. Her lyrics come of as poetry on the gorgeous new single. Graham’s voice is unique, yet holds a stunning familiar tone that holds true to form. The song is packed with punches and gracious harmonies that really show Graham can hold her own. Her voice is utter perfection on the track as the background vocals and guitars swirl around her. This is definitely a great track, which will grab your attention time and time again.
Stream “Charcoal on a Canvas” at Bandcamp: https://lizgrahammusic.bandcamp.com/