SHARKMUFFIN are back at it again with the premiere of their newest single, “Foul Play,” which has just premiered via CMJ.com. The infectious all-female trio is gearing up to release their highly anticipated sophomore EP, 1097 on October 23, 2013. “Foul Play,” already starts to show a more mature side of Sharkmuffin. Echoing harmonies combine flawlessly with the riotous vocals of singer/guitarist Tarra Thiessen. Swirling guitars as well as intricate and dark solos take place, adding a bust of energy to the track.

Recently featured on Impose, Bust Magazine, and Baeble to name a few, Sharkmuffin evokes a raw sound that would make Karen O. and Chrissie Hynde jealous…both whom Thiessen is often compared to. With a handful of CMJ shows in tow (and counting), the band is sure to make a splash at this year’s festival.

Mixed with a tone that is often described as “Dirty Garage Pop,” Sharkmuffin has been winning over the ears of fans throughout Brooklyn and beyond with their raucous live and energetic live shows. Thiessen delivers gutsy vocals that will send shivers down your very spine. Jumping between gentle moans to rough, forceful screams, her vocals are sweetly complimented by Natalie Kirch’s lighter, dreamier melodies, and Sarah Peterson’s heavy drumming duties.

We’re in love with these phenomenal girls! 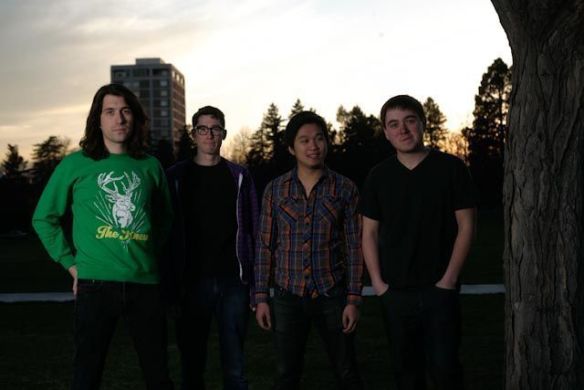 Just off the heals of releasing their newest EP, Tough Kids, in August, THE OUTFIT will be opening for The Lumineers at Red Rocks Amphitheatre on Sunday, September 15th. Located in Morrison, Colorado, the legendary theater holds nearly 9,500 attendees and the stage has been graced by legends such as The Beatles and U2.

Known as one of Denver, Colorado’s most talked about bands, The Outfit will bring to the stage an energenic and vibrant performance that will have you singing along to every song. Tough Kids was released on August 24th, with an impressive Album Listening Party on IMPOSE.

The 5-track EP is filled with echoing garage bliss that is laced with killer licks, heartfelt melodies, and straight forwarded, guitar-based pop songwriting. With their critically acclaimed single, “Caesar,” in tow, the standout track sets the tone for the record, which you can listen to above. The band has also recently signed to upcoming Indie label, Hot Congress Records.

Don’t miss out on this incredible lineup!

New York born, The Golden Furs, have just premiered their debut single, “Strand,” on The Vinyl District yesterday morning. The piece is the first official taste of the buzzworthy band, which has been creating quite a stir with their live shows in and around New York City. Early this October will see the release of The Golden Furs’ first EP, Strand, with an official release party on October 5th at The Bitter End in Manhattan.

Formed in 2013, the group combines elements of rock, pop, dance and folk to create a sound that proves to be captivating. “Strand” evokes a stunning blend of dreamy indie pop as it is reminiscent of heavy hitters such as Muse with a hint of Jeff Buckley. The harmonic melodies of the guitars create a heavenly atmosphere, which provide a sultry bed of vocals for Singer/Guitarist John BellaVia’s.

John BellaVia shared some insight into the new track:

“It was written to reach out to a spirit that’s alive and strong inside of me…maybe not so much flesh and bone just yet, but a small strand that is relieving and in fact every way like me. Since its about reproduction in its simplest form, we wanted to have a sexy groove to compliment the concept of the song: starting as a strand, finding its other half, conception, and birth. Simply put…procreation. The song captures these moments from beginning to end with a soundscape that builds into a victorious outro. An ode to my future kin can be heard throughout the song.”

Listen to the Latest “Someone Else”


Indianapolis born Pravada is ready to spring back into action with their new release, Dirty Looks, due out later this Fall. Sharing with the masses their latest single, “Someone Else,” from the highly anticipated record, the group creates a tasty treat for your ears. No strangers to creating music, the trio of Jesse Lee (vocals, guitar), Casey Tennis (drums, keyboards), and Hubert Glover (horns, bass), spent the earlier half of the 2000s playing in Margot and the Nuclear So and So’s before branching out on their own with Pravada. With two albums already under their belt, Manus Plere and No!, the band is proud to announce Dirty Looks which is filled with 10 electrifying and glorious songs that will stop you dead in your tracks.

The first single off of the record, “Someone Else,” proves to be musical perfection from the very beginning. Evoking elements of The Cars and The Faint, Pravada is out to please. The piece masterfully interweaves staccato guitar licks with a danceable beat, brought to life by Lee’s deliciously sweet, yet distorted vocals. A whirlwind of guitars, drum and bass provide the song with an over-the-edge punch as Lee’s voice accumulates a raw indie rock power and emotion. Before the song even ends, listeners will be craving more of Dirty Looks in the end.

LISTEN TO THE FRESH NEW TRACK “THE ATTITUDE”
https://soundcloud.com/citybirdprstream/ntnt-the-attitude
Portland born NTNT is back in full force and ready to close out the summer. The stellar duo of Dustin Brown and Ryan Berry, have just premiered a new track titled “The Attitude” on Baeble Music. “The Attitude,” is from their upcoming sophomore release, And Then the Moon, due out later this fall. The phenomenal track is laced with electro-punches, dreamy melodies, and prominent harmonies, which will captivate your ears right from the start. The sonically alluring tones mix brilliantly with Brown’s slick and captivating vocals.

NTNT has recently won the Deli Magazine Portland’s Artist of the Month, and have just opened for Gentlemen Hall on several dates. The new album is a follow up to their debut 2012 release,I’ll Find You in the Colors.

I wanted something that sounded wet and tropical but sort of sickening at the same time. I’m not sure that’s the way it’s interpreted by others but I feel that from the dissonance in the guitar bends.  There was a golden recording moment some where at around 10 or 11 am when I finished the chorus that night and went out onto my patio to smoke a cigarette in my robe and just cranked the speakers super loud. I was exhausted and it felt good to hear the bass riff reverberating off the walls of all the different apartment buildings in my complex. The sun was reflecting off the apartment pool and it was super glittery and it sort of felt like the songs roots were captured right there for a second.NTNT will be releasing their sophomore effort, And Then the Moon Fall 2013.