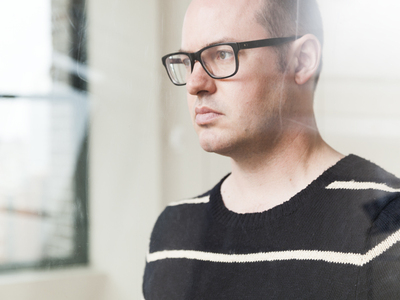 A is for Atom is the brainchild of Mike Cykoski. Recently releasing his latest EP, Song for You, the Brooklyn transplant creates a phenomenal record that will catch your attention immediately. For those who are fans of bands such as The National and The Flaming Lips, A is for Atom creates a sound that is truly unique and certainly pleases the ears.

Cykoski is strongly inspired by songcraft and the art of composing. He enrolled in the prestigious NYU music technology master’s degree program, later taking courses at the world renowned Julliard, and expanding his horizons by completing certificates for Harvest Works and Dubspot, further exploring his interest in electronic music.

It was there at NYU that Mike met his producer Julian Cassia in a film scoring class. Julian was quite taken with Cykoski’s compositions and had a great appreciation for his writing style as well as his international aesthetic perspective. Described as having “tastefully ethnic flourishes and, at times, some sturdy Brit-pop hooks,” the project began when Mike finished his master’s thesis and landed a steady job, making him both optimistic and introspective.

On his recent release, Song For You, he provides an outward expression, with songs that prove to be lively and upbeat.

A standout piece from the EP is the title track, “Song for You,” which Cykoski refers to as a ‘break up theme,’ stemming from his divorce. His haunting vocals swirl throughout the track which resonates throughout. His talent for combining emotional driven lyrics with stunning composition, shines through with “Song for You,” as well as every track on the EP. Check out the single below!

The Native Sibling has just unleashed their gorgeous new video for “Here With Me.”  The stunning black and white piece is as haunting as it is beautiful, evoking the very spirit of the song. “Here With Me,” is the newest single from the Santa Cruz brother-sister duo of Ryan and Kaylee Williams. The track is from their brilliant new release, Letters Kept to Ourselves, which was out June 24.

A couple of years ago, Kaylee was exploring a scholastic pursuit in a quaint town in rural Ireland. Already an accomplished singer, she found herself quickly assimilating with local musicians and singing traditional acoustic folk music at local pubs. Ryan, taking a break from his normal grind as a touring and session guitar player, came for a visit not knowing what to expect from new and unfamiliar territory.

These two siblings had clearly missed one another, and needed an outlet to rekindle their closeness. What happened next was a spontaneous flurry of songwriting that neither had anticipated. Inspired by their new surroundings, they spent many late nights crafting songs and discovering how seamlessly their voices harmonized into a singular sound and vision. “When I came to visit, it was the first time we had ever performed together. The foreign and musical environment sparked our curiosity to play a few songs together at a pub. It felt as if we had been singing for years,” said Ryan.

It was obvious to both that they should continue making music together, so they brainstormed a fitting moniker. “Ryan and I had finally met in a place where we wanted to make the same kind of music. The response assured us that our journey needed to continue as a combined effort,” said Kaylee.

Growing up beside the inspiring backdrop of the Santa Cruz mountains, Ryan and Kaylee shared a childhood blessed by a nurturing family, but also marred by tragedy of their mother’s death just five years ago. They credit her for instilling in them a passionate spirit and a love of music. Ryan and Kaylee are also heavily influenced by Joy Williams (of the Civil Wars), who was once their nanny and still serves as an inspiration.

After releasing their first EP, recorded by a close friend in Santa Monica, the duo toured up and down the coast, which served to tighten their bond and hone their abilities. In an effort to build upon their momentum, they started a Kickstarter campaign and sought out New York producer Daniel Mendez (Noah Gundersen, Dashboard Confessional, Heart) to make their first full-length album. Ryan and Kaylee took a leap of faith and holed up at Mendez’ Brooklyn studio for a full two months. Fortunately, it was the precise chemistry they had been looking for. As Ryan explains, “Daniel listened to what we do naturally, found the best parts and brought them to the forefront of this album. He gave us the perspective to realize what we are capable of creating. I’ll never forget him saying, ‘If I do my job right, nobody will know I was even here.’”

The result is the meticulously crafted and sonically beautiful Letters Kept To Ourselves. The 10-song album is minimal in its acoustic instrumentation, but lush with harmonies and endlessly rich with emotive lyrics. The music seems to conjure up diverse images of sun-drenched California days, the vastness of the ocean and the emptiness of a cold, windy day in Ireland.

New York born, The Golden Furs, have just premiered their debut single, “Strand,” on The Vinyl District yesterday morning. The piece is the first official taste of the buzzworthy band, which has been creating quite a stir with their live shows in and around New York City. Early this October will see the release of The Golden Furs’ first EP, Strand, with an official release party on October 5th at The Bitter End in Manhattan.

Formed in 2013, the group combines elements of rock, pop, dance and folk to create a sound that proves to be captivating. “Strand” evokes a stunning blend of dreamy indie pop as it is reminiscent of heavy hitters such as Muse with a hint of Jeff Buckley. The harmonic melodies of the guitars create a heavenly atmosphere, which provide a sultry bed of vocals for Singer/Guitarist John BellaVia’s.

John BellaVia shared some insight into the new track:

“It was written to reach out to a spirit that’s alive and strong inside of me…maybe not so much flesh and bone just yet, but a small strand that is relieving and in fact every way like me. Since its about reproduction in its simplest form, we wanted to have a sexy groove to compliment the concept of the song: starting as a strand, finding its other half, conception, and birth. Simply put…procreation. The song captures these moments from beginning to end with a soundscape that builds into a victorious outro. An ode to my future kin can be heard throughout the song.”

Listen to the Latest “Someone Else”


Indianapolis born Pravada is ready to spring back into action with their new release, Dirty Looks, due out later this Fall. Sharing with the masses their latest single, “Someone Else,” from the highly anticipated record, the group creates a tasty treat for your ears. No strangers to creating music, the trio of Jesse Lee (vocals, guitar), Casey Tennis (drums, keyboards), and Hubert Glover (horns, bass), spent the earlier half of the 2000s playing in Margot and the Nuclear So and So’s before branching out on their own with Pravada. With two albums already under their belt, Manus Plere and No!, the band is proud to announce Dirty Looks which is filled with 10 electrifying and glorious songs that will stop you dead in your tracks.

The first single off of the record, “Someone Else,” proves to be musical perfection from the very beginning. Evoking elements of The Cars and The Faint, Pravada is out to please. The piece masterfully interweaves staccato guitar licks with a danceable beat, brought to life by Lee’s deliciously sweet, yet distorted vocals. A whirlwind of guitars, drum and bass provide the song with an over-the-edge punch as Lee’s voice accumulates a raw indie rock power and emotion. Before the song even ends, listeners will be craving more of Dirty Looks in the end.