Over the weekend I had finally watched the long awaited of Montreal documentary, The Past is a Grotesque Animal. I was hesitant to view this film for quite some time, as I thought it would destroy my perception of front man and songwriter Kevin Barnes. This proved to be an eye opening experience for sure. The film highlights the band’s career from the very start. Seeing all of the old footage of how the group came to be was rather charming and delightful. The behind the scenes footage was certainly a treat as well. Their vibrancy and quirkiness definitely shined straight from the screen. Every aspect of the band was touched upon. From troubling relationships, to the brilliant artwork and stage performance antics of brother David Barnes and co., it proved to be truly insightful.

Throughout all of the good times and struggles the band often continued with, the film focused quite a bit on Kevin Barnes’ inner demons. The depression, the anxiety, the need to make ‘good art,’ no matter at what cost. The one problem though, is the need to make ‘good art,’ lead to the departure of longtime and key players Dottie Alexander, James Husband, Bryan Poole (B.P.), alongside Matt Dawson and Davey Pierce respectively.

The thing that struck me most was how easily Barnes removed himself from them to make a complete musical transformation. What came to be one of the most celebrated band of the 00’s, has changed into so many forms that there feels like there is something missing, especially in a live setting. The ever exciting line up during onstage dance parties are something that I, as well as many fans, truly miss. Though change can be good sometimes, The Past is a Grotesque Animal, made Barnes out to have villain tendencies. Whether or not this was the intention, it was an extremely fascinating look into a phenomenal band that has hit home with so many listeners over the past several years.

I don’t think I will ever stop buying of Montreal records. Kevin’s songs have always struck a chord with me. This certainly gives me a different perspective into the world of of Montreal. 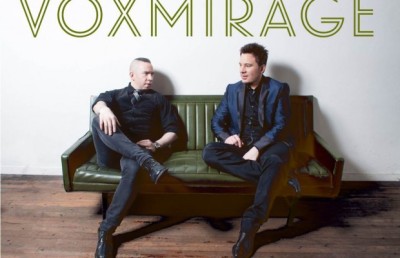 Voxmirage is the group you have been looking for. Recently releasing their debut album on July 15, the duo are about to take the world by storm. The self-titled record is filled with 13 glorious tracks that recall new wave influences such as Tears for Fears and Depeche Mode. Made up of members Mike Streng (Vocals, guitars, bass and keyboards), and Aaron Nicholes (Drums, Keyboards, programming, backing vocals and bass), they create quite a unique and brilliant sound. The record is also stunningly mixed and produced by Ken Stingfellow of  The Posies and R.E.M. respectively., and mastered at the legendary Abbey Road Studios in London.

Kicking off the record is a short, sweet, and synth filled song that is simply titled “Intro.” This piece immediately sets the tone for the record. “All I Want Is You,” combines lush harmonies and dark sounds alongside a swirling bed of synthesizers and guitars. Streng’s vocals start to standout immediately, which carries throughout the entire record. His voice is very powerful, and evokes great emotion on the set on of songs.

“I Can’t Take It Anymore Than This,” continues the greatness of the record, with honest and heartfelt lyrics. Streng’s vocals are soft yet pierce your very soul. Streng’s vocals are dreamy and haunting all at once. Taking the record down a notch is “Hold On,” which showcases the softer and gentler side of the band. Laced with synthesized strings, the vocals chime in to launch a whole new musical aspect of the record. “Never Go Away,” shares a bit of a 90’s retro feel, in a flattering way. The vibrant and danceable aspect of the track is brought to life with lovely twee-like harmonies and punchy acoustic guitars.

“She’s Going Away,” brings a darker synth sound into the album, with a bit of welcomed industrial flare. The tracks on this record quickly prove that Voxmirage are not only skilled, but can bend and combine genres without flaw. “Want Me Too,” and “Just a Fool,” the latter featuring backing vocals by Ken Stringfellow, displays the group’s softer and subdued side on the record. Again the harmonies grace these tracks, which made them an immediate favorite for me. “Just for Tonight,” adds a whole new element into the record with engaging vocals, and an array of instruments welcoming even the slightest trumpet. “On I Go With You,” brings out another beautiful side of this record, as Streng’s vocals are heavenly.

Bringing back the dance aspect of the record with a punch is “Favorite Son.” Flooded with enchanting synths, this piece will surely get you onto the dance floor and it clearly showcases the group’s knack for writing a great pop-esque song. Up next is “Go Insane,” which is Voxmirage’s take on Lindsey Buckingham’s classic song, which somehow manages to upstage the original with their incredible rendition. It brings all of their musical talents into the spotlight. Closing out the record is “I Know What Scares You.” The piece brings together various different elements we found throughout the record, bringing everything to fruition.

Voxmirage’s Voxmirage is a brilliant debut album that will certainly launch the duo into the spotlight. With heavy hitting and memorable tracks, each piece on the record somehow manages to outdo the other. Hopefully we hear a lot more of Voxmirage in the future. This is only the beginning….and the beginning is great. 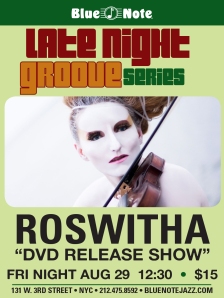 ROSWITHA will be playing a highly anticipated show, celebrating her DVD release at The Blue Note in New York City. The show will be showcasing selections from her album DESTINY and featuring special surprise guests, her musical friends and collaborators on the NYC music scene.

ROSWITHA is an Austrian-born and raised American violinist, singer-songwriter and producer. Her latest release, DESTINY, has been critically acclaimed and has garnered comparisons to the likes of Sia, Sade, Amy Winehouse, Adele, Björk, Florence and the Machine, Les Nubians, Stevie Nicks among others. DESTINY has been listed in several Grammy categories for nomination consideration in 2013.

Roswitha mixes gorgeous violin playing alongside her sultry vocals. With an infectious blend of jazz, classical, R&B, hip hop, rock and pop, Roswitha creates music that appeals to the masses, which transcends to the stage flawlessly.

Roswitha has had an esteemed career as “Queen Rose.” She was featured on MTV’s Unplugged with Trey Songz, and as a member of the Philharmonic Orchestra of the Americas, she performed with the likes of John Legend, Santana, Gloria Estefan and Patti LaBelle. Under the name “Rose Bartu,” she built a highly respected jazz profile and issued the delightfully exotic Cherchez la Verité, a silky jazz album with violin, sensual vocals, and limber Afro Cuban grooves. Roswitha has lead her own bands, performing at celebrated venues like The Blue Note, Knitting Factory and touring Europe. She has notched over 50 production, arrangement, composition, and performance credits on over 19 released albums, videos and film soundtracks.

Ellis Martin is not one to mince words when it comes to speaking his mind. Unapologetic, brash, admittedly arrogant, and yet sincerely passionate, Martin is on a mission to “lift the veil and expose this fucked up world,” and pop music is his method. Presenting lyrics that deliver cleverly twisted cynicism and satire, the artist marries his oftentimes shocking tales with a fusion of classic Motown soul and ultramodern EDM that results in a powerful signature sound he’s labeled “Molly Pop.”

His smooth and sultry single “Just Like A Baby” can be found on his debut EP Pornotopia, set to be released October 21st. He has just unleashed the video for the single, which you can watch HERE: http://youtu.be/m5UOG0e6ntg

Born and raised in Houston, Texas, the multi-instrumentalist and producer, David Schrier, known as Broken Quote, has had a penchant for creating music ever since he was a child.  He would write song lyrics in his head and connect them to the contours and textures his active mind would present–well before ever learning any theory,scales or even touching a key. This is evident on his stunning track, “Ghost Crowd,” off his most recent EP, Foreshadowing Sunlight.
Citing a musical inspiration list that includes Eyedea, Bjork, Beck, Radiohead,John Cage and Parliament Funkadelic among many others,that varied outlook bleeds into his music, an amalgam of styles and genres that is constantly evolving, changing and growing; he is a literal one man band who improvises aspects of his live sets making a one-of-a-kind experience not to be missed. While labeling Broken Quotes’ sound is nearly impossible,there’s a strong link between elements found in Electro Rock, Trip Hop, Acid Jazz and Ambient Funk. Check out your new favorite track “Ghost Crowd,” below.
BROKEN QUOTE: “Ghost Crowd“
https://soundcloud.com/broken-quote/ghost–crowd-1?in=broken-quote/sets/foreshadowing-sunlight-ep
by Jane Lambert

You may not know the name Peter Calandra, but chances are you’ve heard his music. The New York City-based composer and keyboard player has scored 40 films, written over 2000 compositions for television broadcast, including 37 theme packages, and performed as a musician in the Broadway productions of Les Miserables, Miss Saigon, The Phantom Of The Opera, The Lion King, and Little Shop Of Horrors. Parallel to this, Calandra has released three albums of imaginative and lyrical instrumental music encompassing jazz, contemporary jazz, classical, and refined pop. His fourth solo album, Inner Circle, showcases pianist/composer/arranger Peter Calandra’s talents across a wide swath of music styles, always with his trademark sensitivity, abundant technique, and spot-on attention to detail. Working with an outstanding assortment of guest players on acoustic bass, violin, viola, cello, oboe, flute, piccolo, fretless electric bass, and vocals, Calandra explores myriad sonic landscapes, easily navigating from jazz to fusion to pop to classical with uncommon grace, ease, and a rich sense of melodic accessibility without sacrificing depth of emotion.
Below you can listen to and post Peter Calandra’s “Clyde and the Pearl.”
https://soundcloud.com/petecalandra/clyde-and-the-pearl