Junip has teamed with Jose Gonzalez to embark on a huge North American tour, including a stop at Bonnaroo.

Junip recently released a new EP, In Every Direction, which was made up of remixes and unreleased tracks. You can hear one of those tracks, “Nackrosdammen” right here!

The band has also released a new video for their song “In Every Direction” which was directed by the band’s drummer, Elias Araya, who took inspiration from his father (Kent Karlsson). Check it out right here, and if you want to catch Junip and Jose Gonzalez on tour, they will be:

The moment you were sitting on the edge of your seat for is finally here. Bonnaroo has finally announced their 2010 lineup! The festival which takes place in Manchester, Tennessee from June 10th-13th, is filled to the rafters with stellar acts, and if you can believe it, there are more to be announced. The artists are quite diverse this year, more than ever. From Japandroids to Norah Jones, The Avett Brothers to Gwar. Oh and did we mention the Flaming Lips are playing Pink Floyd’s The Dark Side of the Moon? This is going to be one Bonnaroo to remember. Check out the list of artists so far listed below!

A combination of Jim Beam and a desire to change the world produces indie rock band The Honors. The Boston four-piece creates intricate yet accessible rock songs thickly layered with gritty, compelling instrumentation, sophisticated guitar licks, and raspy sincerity. Lead singer Brandon’s passionate vocals are particularly distinguished in “Passing on Blue”; the captivating melody provides the ideal vehicle for an unrestrained, heartfelt lyrical delivery that is one of The Honors’ trademark musical elements.

Jason and Brandon of the band answered questions via email at a coffee shop on tour in Niagara Falls, NY.

Liv: What inspired you to make music together? How did you all meet?

Brandon: Someone once told us that people form bands to either change the world or get laid. I suppose you could say that we are inspired by a good mix of both.

Jason: Brandon and I met while studying English at Regents College in London, England. What began as late night, post-club jam sessions grew into a lasting musical relationship. We reunited several years later in Boston and decided to form The Honors sometime in the winter of 2008. Jason was playing in a successful New England area hip-hop band called The Press Project, and after performing their final show at the 2008 Bonnaroo Music and Arts festival, Jason recruited the hip-hop band’s bassist, Roland, to join the new band. Andrew came to Boston to study jazz at the Berklee College of Music, and knew of Brandon through mutual friends, as both Brandon and Andrew hail from the Ohio Valley.

Liv: What inspires your music on a non-musical level? Like, a book or piece of artwork…

Jason: ‘20,000 Leagues Under the Sea’ by Jules Verne. Anything involving the ocean, really.

Brandon: We had so much fun we can’t really remember. 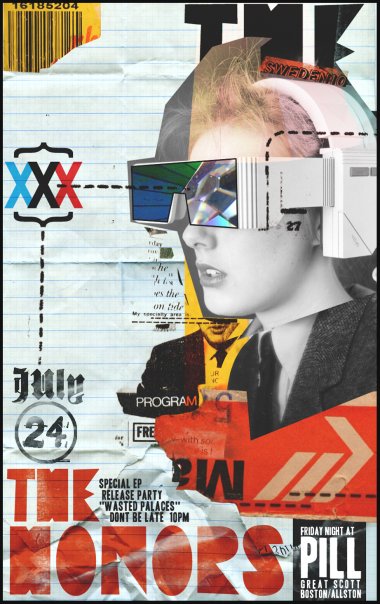 Liv: What has been your biggest conflict to over come as a band or as individual musicians?

Brandon: Who gets to sit shotgun on tour.

Liv: How has the relationship within the band changed over time?

Brandon: We used to shake hands. Now we give hugs.

Liv: What does the near future hold for The Honors? Ten years from now?

Brandon: Ten years from now doing all the same things but in a world we helped to change.

Engaging as many lovely ladies as possible. Spice to taste.

Brandon: Postshow- 30 Pack of Miller High Life, so every lady gets a drink at the afterparty.

Liv: What’s your favorite/least favorite things about being on tour and/or being in the studio?

Jason: Favorite studio experience: the initial play back of a new song.

Brandon: Least favorite: waiting around for the engineers to set everything set up.

Liv: What song do you wish you had written?

Liv: What are your favorite swear words?

Check out the band’s myspace here!