Ben Folds, Damian Kulash of OK Go, Amanda Palmer and author Neil Gaiman will be performing a music production superstunt on April 25th at Berklee College of Music. From 4 pm to midnight, a mere eight hours, they will write and records eight songs, and release them 10 hours later at the Rethink Music conference in Boston. Their goal is to show how record companies are becoming less essential to music distribution.

This event will be broadcast live from the recording studio at rethink-music.com and the album will be released through Bandcamp.com. Proceeds from the first week of downloads will go to Berklee City Music, which provides free music education to underserved teens.

The next day, April 26th, Folds, Kulash, Palmer, and Gaiman will give a presentation on the recording project at 10:40 a.m. at Rethink Music, and perform a private concert for the lucky people registered for the conference. at the Berklee Performance Center accompanied by Basia Bulat and Black Joe Lewis and the Honeybears. 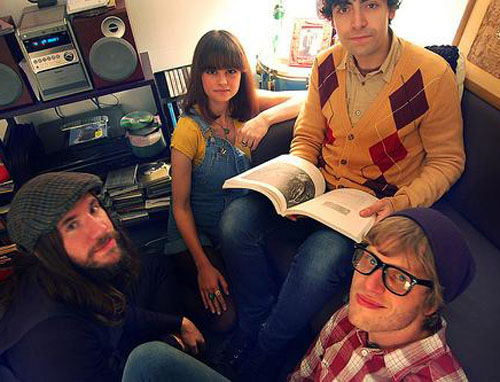 Boston-based rock quartet Mean Creek recently made their way to Brooklyn to record a new EP with legendary producer John Agnello (Sonic Youth, Dinosaur Jr., The Hold Steady, etc.). After being named “Best Boston Act” by the readers of The Boston Phoenix and receiving nominations at this year’s Boston Music Awards for “Album of the Year” and “Song of the Year” for their track “The Comedian,” Mean Creek entered the studio earlier this month with Agnello in an attempt to capture their distinct live sound and energy onto recording. The resulting EP, entitled Hemophiliac, is now available for free download on the band’s BandCamp site. 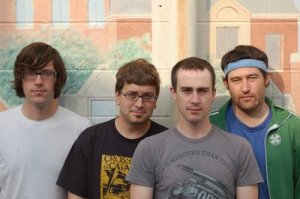 The Hush Now look like they might be starting a tradition. After last year’s sing-along tune “Wishing You A Happy Christmas,” they are returning this year with “On Holiday,” an ode to tropical end of year celebrations. With a Brazilian groove and cheery horns, the Bostonians’ new release will make you want to ditch Christmas trees, white snow and hand-knit deer sweaters for a cool cocktail on a beach with white sand and a guitarist playing a bossa nova arrangement of “Jingle Bells.” The single was recorded with Benny Grotto and Jeff Lipton, the same team behind the band’s latest EP, Shiver Me Starships, which you can get for free on their website HERE!

Listen and share The Hush Now’s love of Christmas below: 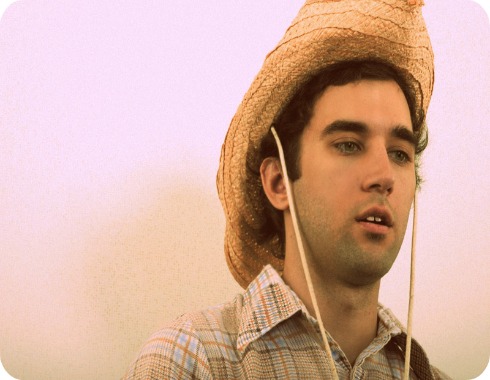 Opening the Thursday-night show among the ornaments and frescos of the historic Orpheum Theatre was DM Stith, who released his first album Heavy Ghost on Asthmatic Kitty in 2009, and who later on in the night played upright piano in Sufjan’s orchestra.

Using only an acoustic guitar and a few pedals—including the all-important looping pedal—Stith rocked back and forth in his chair crooning and layering plaintive vocals over improvised mic-tapping percussion and heavy strumming to create a surprisingly commanding cloud of sound. The sight of him playing under single spotlight in the darkened theater made it all the more affecting.

Watching him perform reminded me of Shara Worden (aka the force behind My Brightest Diamond) and Annie Clark (St. Vincent), who’ve both toured with Stevens and gone on to launch successful solo careers. Given access to a band like Stevens’ or Worden’s, I’m sure Stith could do great things headlining his own tour.

After a short half-hour of set up, during which a crew of camera men prepped for filming (tour DVD?), the Age of Adz band trickled onto the stage. Horn players, pianists, guitarists and back up singers preceded Sufjan as he quietly strode in and counted off the first song.

As “Seven Swans” came into focus, the dimness of the auditorium was lit quietly by star formations that curved and twisted into living constellations on the large, trapezoidal screen behind the band. On a semi-transparent screen in front of the band, projections of snow slowly brightened to accompany the wandering stars behind. By the song’s first crescendo, the band was fully enveloped in lights and sound.

Illuminated visuals, costume changes and synchronized dancing continued throughout the night, helping transport the audience from the inside of a fiery volcano for “Vesuvius,” to a futuristic space landscape filled with white and purple spirograph formations for what Stevens called his “slow jam” (“I Walked”). All of this, interspersed with acoustic songs like “Enchanting Ghost,” made for a show that was varied, well paced and fresh for a full two and a half hours.

The only part that I can honestly say dragged a bit was the latter half of the 30-minute “Impossible Soul” jam. (I liked the auto-tune part, but didn’t care much for the hip-hop/vocoder part.)

The simple green, orange and pink highlighter-like stripes the band wore were a lot of fun. Small touches like these added to the sensory medley, and helped articulate the musician’s skeletal movements while they danced to songs like “Get Real Get Right”—a feel good “reality check” dedicated to artist Royal Robertson, who’s art was animated on the trapezoidal screen throughout the night.

Leading into the song, Stevens set aside a few moments from the musical marathon to formally introduce the audience to this unanticipated spirit guide. With the aid of a small slide show (yes, you read that right), he narrated the tale of his recent identity crisis, wherein soon after releasing The Avalanche he rejected traditional instruments and journeyed into electronic music, where he said he nearly got lost among sonic landscapes.

During this phase, a friend introduced him to Royal Robertson’s art and his unique story: the story of a gifted painter who was overwhelmed by mental illness in his later years, whose life came to an end in the grips of artistic madness. Studying the artist’s work, Sufjan said he was both inspired by and heedful of the story and the lesson it offered. He credited and thanked Robertson for helping him find his way back to an artistic center, where electronic music would eventually come to harmonize with instruments like his trusty banjo for The Age of Adz.

The set as a whole was again made all the better by stories and commentaries like these.

Like the best truly performance-minded artists, Stevens is well aware of how to present and contextualize his music, as well as the identity that gave rise to it. Like many of the great musical stylists, from Bowie to Byrne, Sufjan has a talent for creating sequence and narrative through song, story and show, which allows him to successfully harmonize and manifest his multiple personalities on a single stage in a single set.

Somewhere near the beginning of the show he said, “I know this is all a little mixed up,” pointing around the stage. Laughing with the audience, he declared, “It’s a little orchestral, a little folk, a little rock, sort of 80s and sort of in the future…but it’s all me. Don’t worry though, I’m in therapy and I’m working it out.”

Though the setlist was mostly filled with new material, the crowd was more than happy to stand for the uplifting finale—which was of course “Chicago,” accompanied by a couple hundred balloons.

The encore was also filled with satisfying Illinoise classics. “Concerning the UFO Sighting…,” “Casimir Pulaski Day” and “John Wayne Gacy, Jr.” closed the show. I think many audience members were surprised by the bold choice of final finale, but, despite being one of Sufjan’s simplest songs, it still remains one of his most nuanced and powerful.

Levi’s and Urban Outfitters have united forces to bring free live music to the American public but decided to make a little more fun having people guess where these shows will take place, especially since the shows are all powered by a generator and could take place anywhere. The final two installments of this Secret Generator Series were made just a bit more concrete with the announcement of the final performers: Deerhunter lit up Chicago on September 25th and on October 5th, Boston will get to chill with Neon Indian.

The location information that is currently available is the result of thorough investigative work by Urban Outfitters’ Facebook friends and Twitter followers so now that the events are winding down, you should also keep you eye out for new clues by following the Urban Outfitters Blog HERE, checking your local media or texting SECRET to UOUOUO to guess the mystery locations, which will be revealed on 48 hours before a show.

Welcome to our first installment of  ‘PLAYTIME!’ This has been an idea we’ve been toying around with for quite some time that we have finally launched. Let us explain to you what ‘Playtime!’ is. This will be a segment in which we film some of our favorite bands and artists. Think of it as a version of ‘Take Away Shows’ but on a playground in New York City. Bands will be performing stripped down performances of their songs as life goes on behind them. Sounds nice, huh? Expect a lot more these to come!

Up first is The Everyday Visuals!

Our first episode of Playtime! features Boston’s own, The Everyday Visuals. We took the band to the ABC Playground over the weekend where they performed two songs, ‘Heal Me’ and ‘Florence Foster Jenkins’ off their new self titled record.

The Everyday Visuals Perform ‘Heal Me’

The Everyday Visuals also performed an amazing show at Piano’s that night. An acoustic set if you will. In any situation the band can perform beautifully. Singer/Guitarist Chris Pappas’ voice is haunting and sends chills down your spine even when performing the most upbeat of songs.  You can tell he is a true songwriter and it just comes natural to him. The accompaniment and backing vocals of Joe Seiders, Kyle Fredrickson, and Eli Scheer complete the sound as they play like seasoned musicians with a great deal of soul to them.