We’re starting a new segment here on Modern Mystery called “The Cat’s Pajamas.” Let’s give you a little overview of what that entails:

We also know it means….well it’s also the name of a Spinto Band song off Moonwink and that’s how the name really came about. It fits!

Anyway, every Sunday we are bringing are introducing to you our new favorite band of the week. It’s a good way to discover the little groups out there that you may overlook at first glance but in a few months from now when they get huge, you’ll wonder where they have been all of your life. 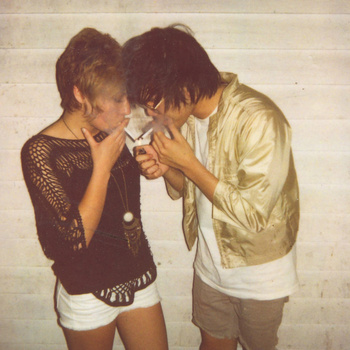 Let’s meet our first set of The Cat’s Pajamas; We Are Trees.
To be quite honest with you, we know NOTHING about this guy/band, though we discovered a haunting song by them yesterday morning called “Dear Chan Marshall.” Hailing from Virginia Beach, singer/songwriter James Nee really has a knack for songwriting. Just releasing their first EP titled Boyfriend, which you can download for free at their Bandcamp. We suggest that you do because it is SUPER awesome. The band is still unsigned but we have a feeling that is all about to change. They fit in nicely with the new wave of bands coming in. Dreamy and brilliant, this is a must listen.

We Are Trees – Dear Chan Marshall by rocksteddie2

Last week at CMJ, we had the honor of filming some of our favorite bands as well as a few up and comers. A Modern Mystery favorite around here is of course, The Spinto Band. We had the honor of filming the group outside on the streets of Park Slope, Brooklyn during CMJ last week the night of their Park the Van showcase. Not one, but two performances, the band performed the classic “Oh Mandy” as well as a new, unreleased tune for Halloween called “Won’t You Buy a Pumpkin?”. This is certainly a few videos you won’t want to miss out on!!! Super thanks to The Spinto Band for filming with us!

The Spinto Band “Won’t You Buy a Pumpkin?”

More Pictures from the Filming After the JUMP

For Day 4 of CMJ 2009, it was a messy rainy night in Park Slope, Brooklyn. That’s where the SPINTO BAND was headling the PARK THE VAN records CMJ showcase. Even though they have alot of gear for five band members, they started right on time for their 12:30am slot on the bill.

If you ever seen one of their shows, or heard the song “Brown Boxes” you know that some of the band members use home made kazoos’s to start the song.. Tonight, guitarist Jon Eaton started the show’s set with a Clairnet for “Brown Boxes”. Pretty fun..and I think it worked well..even if kazoo’s sound cooler. I think this might have been my 5th of 6th time seeing the Spinto Band, and they always rock right from the start.

The band broke into old favorites like ” Mountains” “Direct to Helmet” “Did I Tell You”  and then rocked out newer ones from Moonwink ” Later on” , “Needlepoint” and the really fun “Summer Grof” which was an ODE to comic Janeane Garofalo.Then Tom Hughes joked with the audience and  started their cover of “Brazil” which is on their new digital / vinyl only release called Slim and Slender (Park the Van).

You could tell there was alot of energy from the crowd..there were people there for  CMJ just attending the conference…fans of the band, people just hanging out on a friday night..and even older fans & friends from PA and Delaware who were chanting “Tower Hill” during the show. Tower Hill is a private HS in Delaware where some of the boys started the band. The band worked on another new song from their ep ” JackHammer” and rocked out some older tunes like their classic hit “Oh Mandy.” The Spinto Band never disappoint. If you ever get a chance to see them, or if they come to your town, go see them live!

CHECK OUT MORE SPINTO BAND CMJ PICTURES AFTER THE JUMP!

Modern Mystery favorites The Spinto Band are set to release the EP follow up to last year’s Moonwink titled Slim & Slender (Park the Van) on October 6th. With three new songs by the band plus one incredible cover of Ary Barroso’s ”Brazil,” this album is one of the catchiest releases of the year. If you recall the band performed this song during their last Freakend dates.

As Nick Krill and Tom Hughes switch off on their classic vocals, this is one indie record that will have you dancing. The standout track on the album is ‘Keep Them Alive,” which is equally haunting and poppy. ”Jackhammer” is a rather soft song for the band but still it maintains those incredible Spinto harmonies that we know and love. It shows a more mature side of the band and it resembles a bit of late Pavement.

Closing the EP is ”Thayer Function” which is primarily instrumental with some very sparse vocal. This is a leap for the band as they have never tried something like this before.

The Spinto Band have also announced recently that they are playing the Park the Van showcase at CMJ this year in Brooklyn, and they have extended their fall tour dates. Be sure to catch them on the road, you’ll be sorry you missed them!

It was truly a treat this weekend to attend the New York City show of the Spinto Band who was doing a 4 date mini tour, also know to their fans as ‘The Freakend’. Along for the ride were The Swims, And The Moneynotes, and Big Bang TV. A killer lineup.

I’ve been to a few Spinto shows in my day and the level of energy onstage is always incredible, but on Friday at the Mercury Lounge, the band brought it up to a whole new level. We’re talking astonishing. This had to be the best show I have attended in the past five years, or quite frankily, possibly ever. The room was packed with people ready to dance and it was at least 85 degrees in there. So warm the band was sweating before they got onto the stage.

The Spintos ripped through about 16 songs and somehow brought the energy up with every song. They even invited three fans onstage to dance to ‘Oh Mandy’ which was by far one of the coolest things I’ve seen. Nick Krill and Tom Hughes always deliver on the vocals and the combination of the two fit perfectly back and fourth on stage. The rest of the Spintos, Jon Eaton, Joey Hobson, Jeff Hobson and Sam Hughes hold it all down, never missing a note. From the sounds of ‘Later On’  to ‘Direct to Helmet’ this was surely a night to remember. Hopefully there will be another Freakend in the near future.

The Setlist:
Cat’s Pajamas (listed as ‘Cat’s Shams’)
Brown Boxes
Summer Grof
Vivian, Don’t
Mountains
They All Laughed
Later On
Brazil
Direct to Helmet
The Black Flag (listed as ‘Blag Flak’)
Japan is an Island
Oh Mandy
Pumpkins and Paisley
Late
Encore Included:
Needlepoint and don’t quote me on this, but I believe Crack the Whip. They were not written on the setlist as the band discussed the encore songs on the side of the stage.

TONS OF MORE PHOTOS AFTER THE JUMP

Finally here it is.  Modern Mystery’s Top 25 Songs of the Year! Yes this was super hard to compile, and yes we left some stuff out, but here is what we consider our personal Top 25. Our Number 1 Spot truly deserves it.

Tomorrow we reveal our Top Records. Oh what fun!