Our Modern Mystery favorites, Someone Still Loves You Boris Yeltsin took the stage on Friday night at Terminal 5 which was their first time being an opening band in a long time. They knew they had something to prove and they did it well. Starting with Phil Dickey on vocals for the night, the band blew the crowd away and really got the show started. Performing tracks off their new album Let It Sway their catchy indie pop hooks filled the room and had everyone in good spirits. This is a major tour for the boys and we’re proud of them!
-MM

It’s going to sound highly smug of me to say but it has to be said: I was the first person to say Two Door Cinema Club and Tokyo Police Club should tour together. In all honesty I’m not. After seeing Tokyo perform past summer with Passion Pit I (drunkenly) cornered their guitarist/keyboardist Graham Wright and demanded that they toured with Two Door Cinema Club to which he replied “Fuck! You’re the 8th person who’s told me that today!”

Fast forward to January 21st and what would you know? It actually has happened! The two acts are going on a lengthy co-headlining tour around the US and selling out shows effortlessly. To celebrate they even released a mash up of two of their tracks which can be downloaded here

The venue was packed! People of all ages and varieties. A grand highlight of the night was being in the photographers pit and looking at all the young faces. When I was younger I remember music was something you’d use as an escape and the fact these kids would call Two Door Cinema Club an escape was quite something. I personally love Northern Irish music and seeing this band do so well here in the states hit a chord with me (no pun intended). Everyone danced the night away and the band received the most cheer when they played their latest single “What You Know”

You’ve been hearing the name everywhere. They’re probably your new favorite group. Everyone wants a piece of Miike Snow. No, it isn’t a one man band, it’s a three piece electro outfit originally hailing from Sweden. Over the weekend we had the chance to catch up with singer Andrew Wyatt about their overnight success and their SXSW shows. Take a peak below!

Modern Mystery: Your album exploded onto the scene pretty quickly. Did you ever expect this much attention and praise?

Andrew Wyatt: Not really, not at all. We thought it was something that was fun to make and also some sort of cliche amongst our peers. We never thought it would be music for the people.

MM: What do you like better, remixing or being remixed and why?

Wyatt: Remixing, just because it’s a little more proactive. We just try to pick something we like, and that has process of emotions.

MM: You are set to play SXSW next week. Is this your first time playing the festival and are you excited?

Wyatt: Yea we are very excited! It’s a great festival with a long running tradition. It’s our first time playing.

MM: How does the group come up with songs?

Wyatt: We’re all in the same room. Someone may have ideas in their head. We all create the songs in the same room in the prescence of each other. We take turns after it’s done.

MM: How long did it take you to create the debut album?

Wyatt: Probably 4 or 5 weeks, not inclduing mixing. With mixing it took 6 weeks.

MM: Are you constantly working on new material?

Wyatt: When we are on tour its difficult. I don’t think were going to make the new album on a laptop. The instruments we use are not on the tour bus. It’s difficult to make a new album with us touring so much.

MM: How do you create what you did in the studio and bring it onto the live stage successfully?

Wyatt: Theres just different ways. Sometimes you can’t do something on stage you did on an album. You have to find a viable replacement for that.

MM: What’s your favorite part about playing a show?

Wyatt: I think crowd surfing. So far we don’t have a favorite place to play. We’ve had great audiences all over place. We’re really excited for Coachella though.

MM: What does the next Miike Snow record have in store? Or are you guys just focused on touring right now?

Wyatt: We’ve been thinking about what we want to do , and we have a title an an album cover and were going to work backwards from there.

MM: Your videos are pretty amazing and artistic. Do you guys have a hand in the concept?

Wyatt: Not really the directors have responsibilities and time constraints. It hinders us from ideas. The next record we’re going to have more input on the videos, and we will be more involved next time.

MM: Where do you see Miike Snow five years from now?

Wyatt: We’ll have our own private islands and send out smoke signals to communicate. We’ll throw out our blackberrys!

MM: You’re playing three sold out shows in New York. Are you excited about those?

Wyatt: Of course, and in October we’ll playing Terminal 5. I hope we’ll sell those out too of course its nice to see those big full shows. Like shows in your hometown, there’s nothing like it.

I had mixed feelings going into the Julian Casablancas show on Thursday night. His solo album, Phrazes for the Young, which is pretty incredible, would probably come off well, but would it be the same Casablancas I fell in love with when Is This It came out? Would it be awkward not seeing the rest of The Strokes with him? Could these songs possibly come off like sort of a lounge act on stage? I was probably more nervous than him, who was performing in New York City for the first time in years.

Getting to Terminal 5 super early, the line was already down the street for the sold out show. The crowd is still the hippiest group you’ll ever see. Folks, Strokes fans invented hipsters. The line rushed in as soon as the doors opened. A majority of people hit the merch table immediatly, something you rarely see these days. Sneaking up to the front of the crowd, I knew something special was about to happen tonight.

First taking the stage was Tanlines, a eletronic duo that managed to keep my attention. Telepathe took the stage next, which honestly I could do without. Every song sounded the same, and I possibly dozed off during one part. If the opener was just Tanlines than I would have been happy. Maybe it was because I was dying to see Casablancas, someone I haven’t seen on stage since the last time The Strokes played in New York 3 or 4 years ago.

Hitting the stage immediatly after, Casablancas came out like he was never gone. Launching into “Ludlow Street,” an homage to being back in NYC, the fans embraced him right off the bat. Singing along to every word from the start. It felt good to have him back, and he loved the attention. An audience favorite of the night was certainly “11th Dimension,” as the crowd sang along and danced. Casablancas seemed ecstatic to be playing in his hometown again and his energy was just incredible. Though he still manages to hold on to his microphone stand for dear life, he was not exempt from getting right in the crowd’s face, literally, as he hopped off the stage several times that night. “What a good lookin’ crowd. You’re still the best,” commented Casablancas to the screaming fans.

The 6 piece band behind him were extremely tight, but somehow you just couldn’t take your eyes off of the man himself. The night was filled with tracks off his solo record, and ones like “Out of the Blue,” riled up the crowd like no other. Though you would assume that with only one album under his belt, that he would have lack of material to play on stage. This was not the case. Blazing through nearly every track, he also whipped out a few surprises when he wasn’t talking about how upset he was with Alicia Key’s songs. He shocked us by playing a slow cover of the old Kings of Leon tune, “Velvet Snow,” which was beautiful to say the least. Leaving the stage after “Left & Right In the Dark,” he ran off, literally. The band wasn’t gone for more than 10 seconds before the crowd started to chant for them to come back.

Casablancas came back on stage with the guitarist and said “This is a cover of an old Strokes b-side.” Of course, fans went crazy for this as he performed “I’ll Try Anything Once.” Everyone was singing along, and Julian had the biggest smile on his face. Performing “4 Chords of the Apocalypse” with such spunk, Casablancas got right into the crowd and the security guards had to keep a hold onto him. And with that, he was gone again. But the fans were still hungry. An impromptu second encore then took place as he closed with “Tourist,” Casablancas left the stage by slapping 5 with people in the crowd only to come back instructing his drummer to play a beat for him to sing over “Let’s hear it for New York, these streets will make you feel brand new, big lights will inspire you,” and he was out like a flash of light. Julian we missed you, and from the looks of it, you missed us too.

SEE MORE PICTURES AFTER THE JUMP

Making love like a pair of black wizards is never an easy thing to do. Unless you’re  Mr. Kevin Barnes, the frontman of an indie-pop band , Of Montreal with  roots from Athens, Georgia. Putting on a neurotically avante-garde show is only one of the few talents that  the band possesses.

It’s not even 6 o’clock on a Friday night in Manhattan, but outside of the Terminal 5 music venue, an army of starving fans dressed in skittle -colored clothing are clenching their sweaty fists,while agitatedly waiting for the security to let the crowd begin its flow. The intergalactic monarch and opener of the night, Janelle Monae left the fans hungry for more of her electrically  polished dance moves and nymphet sound. 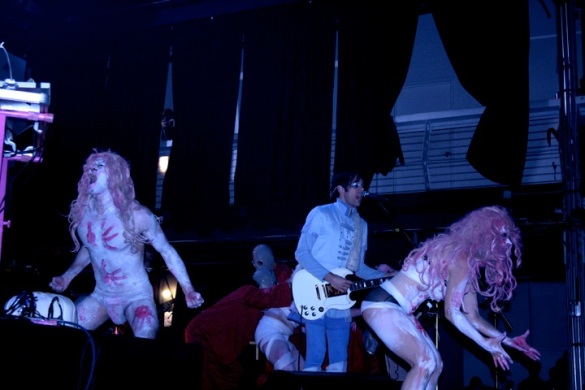 While Monae built up the acid- trip energy for the night, Of Montreal astounded  the massive crowd into another break loose lunatic spiral. Labyrynth’s Goblin king- inspired attire, retro double-necked guitar,  gas masks, crucifix, pillow-fights, confetti, feathers, oh yes, and half-naked girls in diapers joining Barnes and the band during the act. Surprisingly enough, Of Montreal brought back their  2005 album, Sunlandic Twins.  Its  hypnotizing guitars and catchy lyrics had all the fans singing along to the “The Party’s Crashing Us Now.”  Also performed “I was never young,” “ Forecast, Fascist, Future,” “An Eluardian Instance”set off an uncoordinated, free -flowing tone that the band was touring for enjoyment, rather just for the promotion of their magnetically ingenious album Skeletal Lamping. Hissing Fauna also made quiet a number of  surprising appearances.A lthough the album presents an interpersonal reflection on the front man’s tenebrous year, Barnes’ performance says otherwise.

Halfway down, “Cato as a Pun “ and” Sink the Seine” manifested the sound and kicked off any melancholic taste that the  album references to. Towards the end of the set, the show was sort of a rolling sticky ball of bizarre.  Meanwhile, Barnes’ wife, Nina and daughter, Alabee  bewilderedly danced onstage sporting splashy costumes  and wigs. The  night ended with an encore and the band performing Diana Ross’s “Love Hangover”, during which Monae and  Solange Knowles joined the jam.
–By Viktorsha Uliyanova