(Atlanta, GA) November 16, 2022 – An Empty Room, the original series that explores the connective tissue between 6 uniquely influential artists from the Atlanta music scene, continues with one of Atlanta’s most beloved musicians, Shawn Mullins. He is best known for the 1998 single “Lullaby,” which hit number one on the Billboard Adult Top 40 Chart, sold over a million copies and got him a Grammy nomination.

Shawn’s Volume livestream is warm, intimate, and well produced. It feels more like he’s singing for you rather than at you. He sings hits like “California,” ”Light You Up,” “The Ghost of Johnny Cash,” and more. It’s just Shawn and his guitar, providing a vulnerable and open performance.

He shares fond memories and stories of growing up in Atlanta, when he used to go to Wax ‘N’ Facts Record Store which ignited the fire for his future as a career musician. He recalls his first performance at the Little Five Points Pub (now known as the Corner Tavern) when he was called on stage and too afraid to do one of his originals, so he sang  “American Pie,” but the crowd demanded he sing a song he wrote. This was when he realized that people want to hear what he has to offer.

Mullins cultivated an interest in music beginning in his high school days, in part because his grandfather was in a big band group and his mother was musically inclined. He honed his craft in marching band in his college days as a solo acoustic musician. Kiss and Elton John were his superheroes growing up, Kiss being the hottest band in the land for a kid who loved horror movies meant a lot to him. He wanted to sing like Elton, even found inspiration in his fun and animated album covers.

It’s been a quarter century since he exploded onto the folk rock music scene and he has sustained an impressive long-term career, played coast to coast with every artist in his genre imaginable and been a steady headliner for 14 years on the Cayamo Cruises a floating party of music fanatics that in a few weeks will set sail with Jeff Tweedy, Andrew Bird, Patty Griffin, The Nitty Gritty Dirt Band and Shovels and Rope.

Shawn and members of his band will be on hand during his watch party to interact with fans as a warm up for his Variety Playhouse gig on November 26th.

Listen to the An Empty Room Podcast here.

About An Empty Room

Created and produced in the height of 2020 when touring artists had to pivot, the Empty Room series features quality documentary-style storytelling interspersed with musical performances where the up close viewer perspective serves as the sole audience member.

The Atlanta-based Kearns family created and produced the entire series when the music industry as it was once known had shuttered. The family captured intimate performances and never-before heard stories from musicians with deep Atlanta roots during a time when neither producers nor touring musicians had a clear trajectory for creation. “When the artists asked ‘What do you want me to play?’ I told them: Whatever you would play if you were sitting by yourself in your living room,” says Martin “Marty” Kearns.

Volume.com is a 24/7 free live stream platform that allows engagement between artists and their fans to help artists build and monetize their craft, from ticket sales, subscriptions, merch purchases, or by using Volume’s unique online tip system.

Volume differentiates itself by connecting all viewers and performers with first-class sound and visual quality. Their multi-layered audio effects, plugins, and soundcheck create a unique and seamless experience for both performers and audience members. They celebrate all artistic expression, be that in music, podcasts, comedy, or even sports, and provide a fun, welcoming, and vibrant community for all.

The hippest and coolest French band is taking over New York City’s Madison Square Garden on October 20th, proving to us that immense success can happen to good people too. As the show time approaches, Phoenix are now inviting EVERYONE (who has a Twitter account) to spread the message as well.

By registering HERE, you can re-tweet about the show, which will also mark the MSG debut of Dirty Projectors, and in return, you will get a free download of  “Love Like A Sunset Part III” as the band unveiled, in the advent of this concert, that “Love Like A Sunset” is actually a trilogy, from their fourth LP Wolfgang Amadeus Phoenix.

You can listen to this exclusive dance track below:

(via Some Kind of Awesome)

So do your bit for Phoenix and they will reward you accordingly!

Gayngs are taking their 10-cc inspired tunes on the road! Since releasing their album Relayted, out on Jagjaguwar, they have been one of the top 40 new bands of 2010 by Stereogum, they will be performing on Late Night With Jimmy Fallon on October 4th and now they are bringing their 69-BPM songs to the masses for a short US tour. The core of the band, Minneapolis producer Ryan Olson and Solid Gold’s Zack Coulter and Adam Hurlburt, will be joined by many of the twenty-plus collaborators they had during the recording of the album, including Justin Vernon and Mike Noyce of Bon Iver, Ivan Rosebud of The Rosebuds and Mike Lewis of Andrew Bird!

For a frame of reference, this is what Gayngs sounds like live. This rendition of “Faded High” was filmed for “City of Music,” the weekly live performance series by Gimme Noise for MPLS.TV, a Minneapolis online television network. Check for their tour dates after the jump!

Watch them perform “Faded High” below:

Here are their upcoming tour dates: 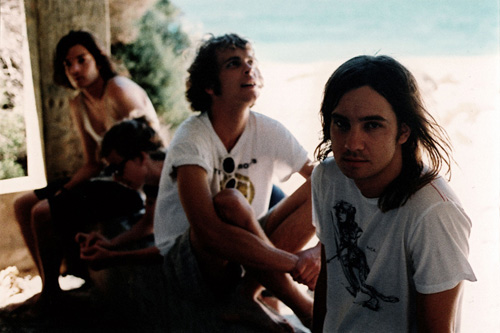 Tame Impala just released the video for their song “Lucidity,” off their debut album InnerSpeaker, out on Modular Recordings. In the song’s lyrics, lead vocalist Kevin Parker sings about reaching the sky; the video’s director Robert Hales took that idea to the extreme. Shot about 300 miles from Melbourne, the video was shot by a camera launched into space with a weather balloon packed with a GPS unit, which returned to Earth once it popped at its summit 14 miles high in the air. The effect is quite impressive with the image flipping and turning, slowly getting further and further from the ground into space. Preparation was strenuous: numerous authorizations had to be obtained from the Civil Aviation Safety Authority and the first cameras launched fogged up, or ran into clouds that obscured the view. But the result is beautiful and you can watch it right HERE.

Watch the video below:

If they put so much effort in their videos, imagine the dedication that could go into their live shows! They will be embarking on 10-week international tour next week that will bring them to the United States in November so definitely check them out.

Here are their upcoming tour dates:

Magic Kids’ debut album Memphis, named after their hometown, out on True Panther Sounds came out in August and has led them to be compared to E.L.O, Belle and Sebastian, all with a Beach Boys influence. The video they have just premiered for the artsy music bloggers at Yours Truly is a record of their first venture out in the Bay area, where they performed at the Oakland’s Ghost Gallery on February 15th, 2010. During this rendition of “Candy,” the band was joined by Christopher and Garrett from Girls, Max from Smith Westerns, members of a weekend flute club, a string section and more friends for a touching and laid back performance.
Watch the video below:

If this intimate live performance caught your attention, you may want to catch Magic Kids on their tour, which currently has them running around Europe but will see them back in the US of A in November!