If you’re a fan of Le Tigre, this is for you. Oscilloscope Laboratories will release the film Who Took the Bomp? Le Tigre On Tour on DVD on June 7!  Directed by Kerthy Fix, the cameras followed the electronic feminists during their This Island tour and includes never before seen live performances, archival interviews, and revealing backstage footage.

Watch a clip from the film below. Here’s Le Tigre performing “Deceptacon:”

The film will premiere at South By South West next week and will be screened in various cinemas around the world after that. Check out the dates below.

Here are the following movie screenings: 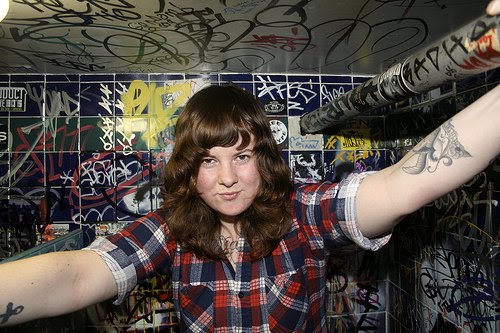 Not necessarily true.  But JD Samson likes them.  “This band is going places,” says Samson in this clip, and coming from a woman who used to go places, that’s a true compliment.

Be on the lookout.

Remember how awesome Le Tigre was? The left-wing sociopolitical electroclash group from the late 90’s paved the way for feminists who really like dancing and dancers who really like feminist lyrics.

Preparing to release their debut in February 2011, Talk About Body (IAMSOUND), MEN have released a video for the single “Off Our Backs” to critical acclaim.

A bend towards political-pop, MEN offers a platform for issues such as wartime economies, sexual compromise, and the demand for liberties in synth heavy post-punk, post-gender songs.