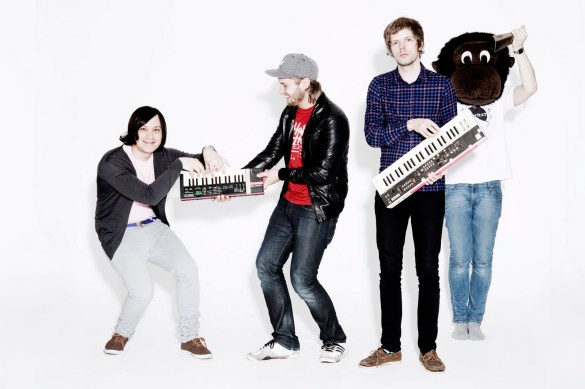 The beauty of CMJ is just the astounding amount of bands that end up playing there. The Norwegians from Casiokids were not about to miss the party and we were not about to miss out on the chance of chatting with them while they were here, especially since their newest album, Aabenbaringen Over Aaskammen, just came out on Polyvinyl! We spoke to two members of the band, Ketil Kinden Endresen and Omar Johnsen, in a hallway at Pianos last night and here’s how it went!

Modern Mystery: How many times have you been part of the CMJ line-up? How do you like it?

Ketil Kinden Endresen: This is our second time here, we last came in 2008. It was also our first show in New York, at Cake Shop. But we’ve been in New York many times since then. I think this is our 10th mini tour in the U.S. Playing in New York is definitely one of my favourites.

Omar Johnsen: It’s nice when we’re playing things like CMJ or South by South West, you can stay in one town too. It’s so much easier.

KKE: It gives you time to enjoy the city as well.

MM: So where do you like to hang out in New York?

KKE: We spend a lot of time in Williamsburg. We try to go see museums, go to Central Park and roam around Manhattan.

MM: So your songs are in Norwegian, which can’t be easy for everyone to pronounce. Which place had the oddest pronunciation of Norwegian?

OJ: In a way it was the best and the worst [laughs]. They were very into it but it did not sound like Norwegian!

KKE: Still it was pretty special, they were very passionate. But mostly outside of Scandinavia, there is more dancing than singing along. In Scandinavia, they sing more.

MM: What is your biggest musical influence?

OJ: It’s hard to pin down because everyone is from different places. There is some overlap but I think it comes out through our music. It’s like a pot of stew.

KKE: Well, there is this Swedish band called Bobhund that we all like. There’s also electronic pop like New Order, Kraftwerk, Cornelius…

OJ: I guess also krautrock like Neu… Everyone likes these bands at least [laughs].

MM: Anyone you’re excited to see here at CMJ this year?

KKE: I haven’t really looked at the program to be honest but generally I like to rely on luck. Like tonight we got here and then went upstairs and realized our friend was playing!

MM: So your new album, Aabenbaringen Over Aaskammen, just came out. How would you describe to someone who’s never heard your music?

KKE: It was inspired by the story of Dr. Tarzan Monsoon and his discovery of a secret rainforest. It’s quite varied and with electro and dance rhythms. Our stories are in Norwegian and we use a lot of harmonies in our vocals.

OJ: It was also made differently from our past albums. Before, the albums were more like compilations of singles. It’s quite diverse but it’s still a sound that sounds like us. It’s also better produced; we have our own studio so over the years, we’ve learned more and got better.

MM: I hear you’re going to Japan next month! What are you most excited about?

KKE: Yes, on November 6th! I’m excited about the food. Japanese food has to be my favourite food in the world.

OJ: I want to discover the culture, I find it very inspiring. Maybe it’s because I’m half-asian so I have a special attraction.

MM: Do you know when you’ll be back in New York after CMJ?

KKE: Not yet. But we’ll definitely be back sometime in the spring.

Catch Casiokids during the rest of CMJ here: