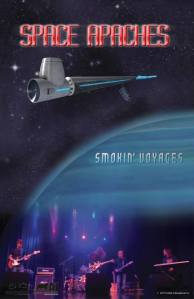 Space Apaches is one-hell-of an upcoming band that have been making their rounds in the music realm lately. Often described as a ‘psychedelic Eagles with a sense of humor, the band impresses with their latest release, Smokin’ Voyages,  which is out now (and a highly suggested listen I might add!). i had the chance to speak with Andrew from the group, to get inside the heart, soul, and head of Space Apaches.

How did Space Apaches come together?

We all play on records and do studio work. So we naturally gravitated together. In the Asheville area, though it has a great music scene, the session player circle is not that big. Since I produce a great deal, I used these guys a lot before the Space Apaches thing happened. Everyone likes each other genuinely and I think that is reflected in the tightness in the recordings.

What albums, artists and inspirations stood out to you the most, to form your musical taste and structure?

That is a difficult question as every person is a collection or an aggregate of experiences, musical and otherwise. A band situation compounds that exponentially. For me, (Andrew) I always look for a “real” artist. I’m not into plastic and homogenized or “wanna be” artists, even if they are commercially successful. This is perhaps why one has to look past production and portrayal to get to the essence of an artist. Great albums…Born to Run (Bruce Springsteen), Wish You Were Here (Pink Floyd), Venus and Mars (Paul McCartney), Only Visiting this Planet (Larry Norman), Aerosmith (Aerosmith of course!)… There are bunches… Now the Space Apaches is, on the surface, about joy and not taking ourselves too seriously. However, the astute realize that there is substance camouflaged in the music. But to your question, here are some of my big influences were Gordon Lightfoot, Bluesman, John McVey (who I produced a few records for), Jeff Beck, Blue Oyster Cult, Larry Norman…and for this record, the Eagles, Aerosmith and Mason Proffit, which was before my time, but I love the vibe of the music!

Your music is very energetic. How do you take the songs from the studio setting and translate them onto the stage?

Everyone is a seasoned session player, so capturing a great performance is not really a problem in the studio. Plus, the way I’ve designed Sedgwick Studios, we can actually play live and have fantastic sonic separation! We track in the same space on the 3rd level with the amps in the various isolation rooms on the 1st level or in the adjoining “white” room. The 2nd level is a big room used for natural reflective sounds where the band’s sound bleeds into through a special “sound hole.” In this reflective room, we incorporate various distance miking to create sounds that you can’t get from signal processing units.  THUS, we have eye contact and interaction! Just like you would live so that we can react to each other organically. Live, it is more of a jam. I like it looser with more spontaneity. I think that in any setting, the artist must enter as “state” where he or she blocks out everything and totally feels the experience…this normally jacks up the energetic transaction!.

What is the inspiration behind your lyrics, in particular, on the new album, Smokin’ Voyages?

There two key words that pop up all over the record, “Mind” and “Feel” or “Feeling.” These themes both involve consciousness. All we really know is that each of us are feeling sensations and are experiencing something from moment to moment. Our understanding is inherently limited as Descartes pointed out 400 years ago.  The songs on this record play on this topic and range from broad philosophical offerings to day-to-day experiences, such as the news and relationships. However, most of the songs are about the broader context of interpreting life…with suggestions on how each of us has an option of how we choose to experience it. I think we are more than Mind…

How did you choose the name Space Apaches for the band? Was there any specific reasoning or choice behind it?

I think that the name Space Apaches captures the idea of “outlaw consciousness” and energy well! After all, we’re from a distant planet right? You think of folks that contemplate such topics as “spacey” or “out there!” Well, this group IS an outlier! We ARE different and our model is freaking people out with all the health-science and other innovations. The purpose or purposes of the record ARE different. Apaches are depicted as wild and courageous! And that is exactly what we are doing with the use of HEV and other technologies…not only for listening, but even their use in the creative process. Plus, we like a bit of recklessness and aggression when playing!!!! That qualifies you as an Apache!

Musically and in instrumentation, what are your inspirations? What is your method for not only writing a song but for writing an entire record?

I think that the 70s produced some of the best sounding and best produced records. Generally speaking of course, they had warmer sounds, somewhat more thought behind them…and this era produced some incredibly interesting listening! And there was something about vinyl! That is one of the reasons Smokin’ Voyages is in a quality vinyl format! We wanted to provide that experience as well! An LP mindset is different from a singles mindset. There is a beginning, middle material and an end. I try to do that on every record I produce so that a “story via feelings” is created. One of the things I despise in the current recording environment is that all of the songs on so many records have a “sameness” that I find uninteresting. This is due to lack of budget as well as to lazy or inexperienced/unimaginative or non-courageous producers and engineers. Regarding instrumentation for the Space Apaches, again we must look at the Eagles, Aerosmith and Mason Proffit as stylistic influences.

Method of writing the record… Hmmm…. Are you sure you want to know? Of course, I can’t speak for the other Apaches, but here we go…  There are certainly many technical things that I do, but the essence of the feeling is what I start with, always…. Nothing calculated… The feeling is normally linked to an idea or theme… I write the idea down and then go into what I’ll describe here as a “state” where I “let go”… sometimes naturally as I have since I was a boy, but often using proprietary technologies to help me maintain an “in-between” state of consciousness…in-between the waking and sleeping state that is… Ideas tend to be much more fluid in this state. When I do this, more and more substance of the songs comes…  I know you probably think this is weird, but this method has impacted my life far beyond music…materially as well as my overall level of happiness. I am SO grateful to have been introduced to it… Plus, I don’t rush! A song is done only when it is done. And this takes time.

How would you describe the Asheville, NC music scene?

It is bohemian for sure! And there is all kinds of music especially original music! It is one of the reasons I chose to build a studio here! It is a thriving music and art city! Downtown it is like, groovy restaurant, art gallery, groovy clothes shop, art gallery, funky bar, another groovy restaurant…street after street! There’s a musician on every corner it seems… How can you NOT be into music with a scene like that!!! And there are a lot of places to play! Plus, you overdose on green! At least that is what the LA players say to me when they fly in to do a session! The mountain setting provides such inspiration!

At what point in your life, did you know that being a professional musician was something you wanted to achieve and become?

My 2nd cousin, Terry Kirkendall, was a killer, killer drummer (He went on to play with the Derailers and others…) Well, when I was in 7th grade, I went over to his house for a family thing and he and his band (guys with actual mustaches) were rehearsing in the basement. I was blown away! I thought “I gotta do this!” I noticed that the bass only had 4 strings and that you plucked them! I knew for a FACT that I could NEVER play the guitar with 6 strings and chords!!! So I thought “Maybe I could learn to play the bass!”  That was the beginning!

What is coming up next for Space Apaches?

We have 13 cool videos to release for Smokin’ Voyages. Plus we’re going to release some live stuff. We’ll also be exploring more of the synapse-altering technologies as well and how to incorporate them into music and other things! There are some new developments with some of the scientists and researchers that I’d like to be involved with. Just don’t drive when you have a HEV version of a song playing or you might wind up in the ditch! You know you are in trouble when you listen to it and you say to yourself “This isn’t doing anything!” That’s when your guard is down and WHAM! You’re in space!