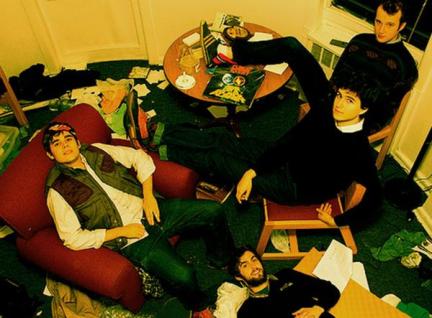 It’s only a few days until Vampire Weekend releases their second record Contra (XL) and it’s safe to say that people are pretty excited. Alright, extremely excited. The quartet is bound to make an even bigger splash the second time around especially since they managed to out due themselves, which a lot of people thought would never happen. This edition of Secondhand Sunday is Vampire Weekend’s “A Punk.” Yes kids, thats where it all started. Two more days until Contra!

I’m not going to lie. I never ever thought they’d be able to do it. It seemed nearly impossible. It would be too hard. Oh what am I mumbling about you ask? Vampire Weekend. That’s right, the band is back to prove me wrong that they’d never truly survive the dreaded ’sophomore’ slump. It’s nearly as if Ezra Koenig and the boys tried to prove me wrong on purpose. I’ve been defeated.

Vampire Weekend is set to release their second record, Contra (XL), next week, January 12, and has everyone at the edge of their seats. Starting off is the first single “Horchata” that could have easily been on their debut record, as it picks off where the last ended off. Though at the second track “White Sky,” we really start to see some progression in the band’s sound. Koenig’s voice is easily infectious in this song, and the harmonies and ending are nothing less than dreamy….I’m already hooked. “Holiday,” sounds exactly like it should; a beach song filled with melodies that make you want to get up and dance around the room. I may or may not be doing that right now. The band has mentioned that they took influences from ska bands such as Operation Ivy, and it really shows.

Autotune takes over in a new direction for the band on the shortest song on the album, “California English.” It takes a few listens to get used to this one, but in time, it starts to grow on you and the band is really determined to defend this one. “It doesn’t sound like T-Pain. There’s plenty of music from around the world using Autotune besides American Pop,” states Koenig. “Taxi Cab” and “Run,” show the more mature side of Vampire Weekend and it suits them. What we’re seeing here is a band trying to grow up, and they’re doing it well. Not only music wise, but also in lyrics such as in “Taxi Cab” which carry the words  ”In the shadow of your first attack, I was questioning and looking back; You said baby we don’t speak of that; like a real aristocrat.” A true step from their prior work. “Run,” which brings out the musical maturity of the band is filled with unforgettable drums that rhythm keeper Christopher Tomson is quite proud of. “On this song, I experimented with certain rhythms that I avoided on the first record. I like how this song alternates between heavy, Rock-like choruses and reggaeton verses,” he says. I’m with him on this.

The next song  brings us to “Cousins,” which was recordeded in Mexico City and has to be one of the most fun songs written in the past five years. The next track “Giving Up the Gun,” follows right in it’s footsteps making it a non stop indie dance party right in your own bedroom. “Diplomat’s Son,” continues the event with an explosion of reggae beats that seemingly fit the album like a glove. Closing out the experience is “I Think UR a Contra,” which is the most mellow song the band has ever recorded and it uses acoustic guitars and string sections. It’s a beautiful ending to this extremely surprising album. Vampire Weekend is going to be one of the most used names this year, so sit back and get comfortable with Contra. It’s going to be a long ride.

Vampire Weekend is also letting you stream the whole album on their Myspace starting yesterday afternoon. Give it a listen!