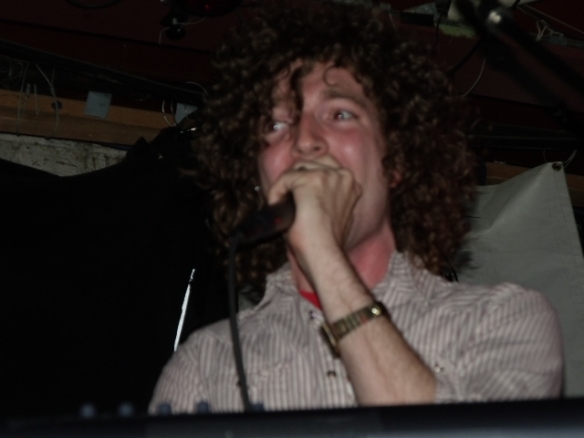 Hot Hot Heat never seem to cool down….as a band that is. The indie synth dance punk pioneers have been taking the stage every Wednesday night this month at Public Assembly in Brooklyn to sold out crowds of eager fans. Catching the band on the third show of their residency in this charming little neighborhood, HHH sure knows how to put on a show.

Oddly enough I have never seen the band live though I’ve been a fan since Make Up the Breakdown (SubPop) was released in 2003. This was about three record labels ago and a slight change in lineup. One thing is for certain though, the band hasn’t lost the energy that makes them a great group to begin with.

Hot Hot Heat will release their newest record Future Breeds (Dangerbird) on June 8th, and from the sound of it, the guys somehow managed to top their previous efforts.  My personal favorite new song of the night was the first singlem “20 @ 12,” which was about them being with a friends of their’s who was turning 21 and midnight. This is only a tastes of what Future Breeds have to offer.

I must admit that I went into the show thinking that only new songs would be played. I was mistaking. Though several new tracks were played, they were blended perfectly with our old favorites. Songs like “Naked in the City Again” and “Bandages,” brought back college memories of listening to the band while studying. The guys are not old by any means as they are only in their early 30’s, but it seems like they have been around forever.

This shows especially on the stage as they are old pros at the game of charming an audience. Frontman Steve Bays rocks his keyboard stand back and fourth on an angle, while playing mind you! He doesn’t miss even the slightest note. Heading directly into the face of the crowd several times, you can tell the fans were really eating it up in this most intimate venue. You can see that Hot Hot Heat was eating it up as well. There was plenty of dancing going on in the place and everyone, and I mean everyone, was having a blast and singing along to the classics, hoping to soon learn the new ones.

The group did a short encore as Bays came out saying “I think we’re running out of time,” which was the perfect cue for them to play “Running Out of Time.” To make a perfect ending of the night the band ended the set with “Goodnight Goodnight,” which couldn’t have been any better. We didn’t want them to go, but we all know there is one more night we can relive it in New York.

Hot Hot Heat plays the last night of their Public Assembly residency tonight, Wednesday, May 26th, before heading to play a month in Los Angeles in June. My word of advice to L.A. residents, is to get your tickets while you can, because these shows are selling quick, and it is truly an amazing experience.

Hot Hot Heat are on fire!

Check back to Modern Mystery in the next few days for our exclusive interview with the band!

Look at More Pictures from the Show HERE