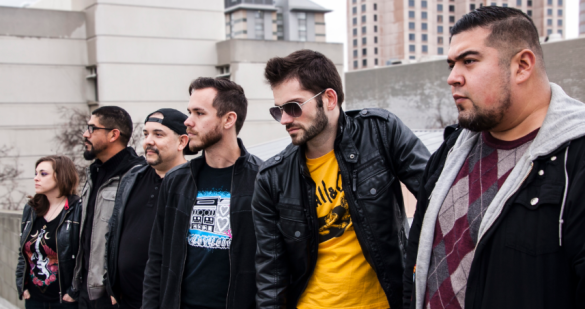 Frantic Romantic quickly become our favorite band this Fall with the release of their new video “Among the Stars.” Themed with ‘Day of the Dead’ elements, the group outdoes themselves not only musically but visually as well. With bursts of color and darkness, Frantic Romantic will have you intrigued within first listen and view. We had the chance to catch up with the group for a very special Video Voyeur, below.

1. Tell us the story of this song, why did you choose to visualize this song specifically?
When we wrote this record, We as a group had suffered some losses. I know specifically the lyrics to this song, are about Michael’s former band mate and friend passing away, but the bigger theme in the song is also coming to terms with the idea that as we move forward in our lives, we are powerless against change, we move for our careers, or relationships, and we lose touch of things from our childhood, friends, places etc. and when we don’t realize that, till those things are gone, and we’re left missing something that use to be.
2. What was the inspiration behind this video (visuals, storyline, etc.)?
I feel like the visuals are fitting, it’s an homage to what is left behind, much like what is celebrated on “Dia de Los Muertos “, where in the Mexican culture, we honor our loved ones we lost. I’ve always had a deep connection to my Mexican roots, being that my parents were Mexican immigrants, and I was fortunate enough to get to know Mexico well as a child. As far as the story line, Chris conceptualized the heist element, to me it feels a little reminiscent of movies like “killing them softly “, but with the make up and lighting to make it memorable.
3. What was the process of making this video?
We had been filming a bunch of videos for this new record, with all that creative energy, we got inspired to take this project on, and really just shotgun the process. We had our cinematographer friend Brian Godoy Palma come and physically shoot and conceptualize the look, and help with set design. We had another friend Ana Palacios, come and assist with the make up design. Then we just focused on capturing the performance, and telling the story. It was a long processor, but because it was something we did with our own hands, it was rewarding when we wrapped.

Listen to “Among the Stars” on Spotify: