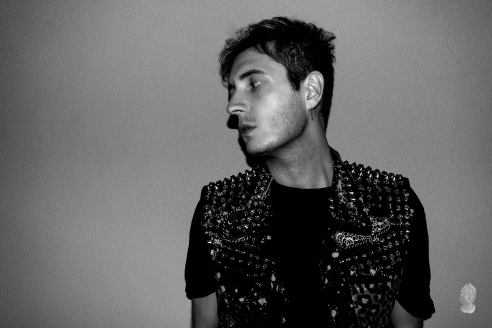 The Hate Club have been one of my favorite new discoveries this Fall. The brainchild of Alex Poe, he takes us on an amazing ride with his new single and video for “One Mile Away.” Nostalgic and danceworthy tones bring the piece to life, as the collaboration of visual and audio go above and beyond to create a noteworthy experience. We had the chance to catch up with The Hate Club for an exclusive Video Voyeur which you will find below!

One Mile Away is one of my the most favourite tracks on the EP, alongside Little By Little, and it felt natural to start with it. Besides, I noticed that a lot of fans and people going to my shows were really digging it so it all made sense. The song itself was created right before The Hate Club was born, I was going through a very difficult breakup situation, and all the music written at that time was so therapeutic for me. I absolutely needed to make this edgy sound and write in a manner that helped me recover and get over being dumped like that. I felt really frustrated and pissed off. I think I was always the one caring too much and this song is really about looking for someone to fill that hole in you…for one night…when you’re hurt you stop believing in romance and all the pseudo-inspirational stuff and I didn’t want to feel weak, I didn’t like it.

What was the inspiration for this video (visuals, storyline, etc.)?

The video went through several storyline permutations, but the core idea of a performer not getting any “love” on stage until his transformation was always there. It is reminiscent to when I just started performing, when I was suuuuuper shy and unconfident about being on stage, omg, it was bad haha. And then with The Hate Club I kind of stopped caring about a lot of insecurities that I’ve had and instead went for this idea of an antihero. We’re always so focused on things that represent “our best”, but then our flaws (or what people call flaws) also make us into what we are. That is true to the sound I’m making, personality and the entire artistic vision. That’s where I feel comfortable being at.

Full idea for this video was developed with the director Vlad Akushevich whom I met in LA, we met up at my place and really kicked it off. That’s when we started goofing around and came up with the whole talent show thing and decided to pursue those ridiculous cliche visuals. We pretty much knocked the whole idea out in a couple of hours and then it was a matter of the details and figuring out camera angles. We end up having so much footage that we could easily make into a film haha. The actual production was super exhausting, since I was producing it, directing, starring, building the stage and making sure everyone shows up. I remember finishing the stage set up at 3am on the day of the filming, and then driving a truck to grab more gear because we missed something, and then filming everything for 2 days, it was insane. I think everyone did such a great job to make it happen, people really had a lot of fun on the day of the shoot, it kinda turned into a party by the end of it all.

Find The Hate Club via: