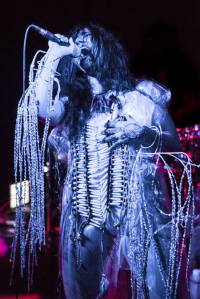 Vajra is a name I am very familiar with in the New York area. Also making their rounds on Sirius XM, playing SXSW, countless NYC venues and more, the band is taking off in a whole new light. Formed by Annamaria Pinna while she was in India, a bit of self discovery brought to life Vajra. Pinna is an accomplished composer, singer and multi-instrumentalist. The group have just released their latest single “Blind (Blood Mix)” at the end of this Summer, and the track is just as strong, a couple of months down the line. The haunting and dark undertones are hypnotically laced, as it recalls Eastern Indian themes. Pinna’s voice is captivating and strong; an unstoppable force crawling out of the musical bed. While heavy hitting and dark the band proves to be very accessible, especially with the addition of Pinna’s smoky and seductive vocals.