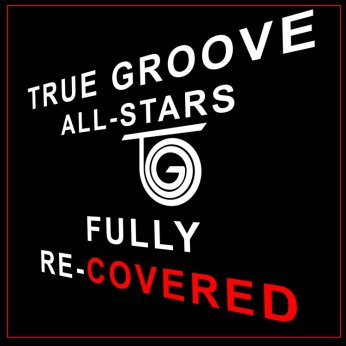 The True Groove All- Stars are ready to release their new record, Fully Re-Covered, the sophomore release for the group. Taking on what the band refers to as a modern anthem, they transform their songs to reflect human solidarity. The follow-up to their successful remix debut, Funky World, the latest album brings 13 tracks to life, capturing the mid-70s, early 80s, and a dose of reggae in between. Fully Re-Covered is set for release on March 31, 2015.

Currently, the group is sharing the album’s first single, “Hit Me With Your Rhythm Stick (feat. Marla Mase and James Chance),” which perfectly kicks off the collection of songs.  The range of songs on the record is phenomenal and at times a bit surprising…in a good way. Standout pieces on the record include Heather Powell’s version of “Relax” (Frankie Goes to Hollywood), as she seduces with an R&B infused sound. Newcomer Lael Summer calls for Califoria with “Wires,” originally from The Neighborhood, putting her own special brand of Soul into the track. One of my most absolute favorites though is Samuel Claiborne’s Johnny Cash via Nine Inch Nails cover of “Hurt”; somehow giving it more depth than the NIN and Cash versions. That is an accomplishment in its own right. Fully Re-Covered accesses an array of genres and classic songs, new and old. Each artist on the record offers something intriguing and different, that will leave you wanting more.

Listen: “Hit Me With Your Rhythm Stick” HERE