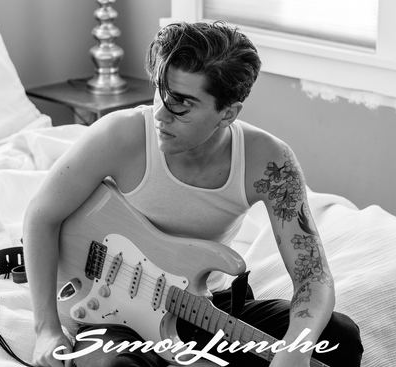 Simon Lunche has quickly become one of our favorite artists this year with his eclectic brand of sultry rock. His charming solo endeavor has unveiled the song “In My Arms,” which is a breakout piece for the artist. We had the pleasure of catching up with Simon as he dives deeper into the piece.

1. Tell us the story of this song, why did you choose to visualize this song specifically?

Around the time I started writing it, I was having a lot of trouble letting go of a love that I’d had in my life for a while. Pretty much all I could think about was; I’d do anything to have this feeling back. Of course that’s what finally became the first line of the song, “Oh I would do anything for you”. What I didn’t anticipate was that the song would eventually be about a completely different situation. It wasn’t until over a year after I had the original idea that it finally blossomed in the way I wanted it to.
I was at the start of what was becoming a pretty long distance relationship, and the emotions surrounding it were starting to worry me a bit. Getting attached to somebody who I couldn’t see or be with very much was an unexpected thing, and I was scared at the prospect of those feelings growing. One day when I was making the long drive home from a visit, and feeling particularly sad about having to leave, I just started singing to myself in the car. About 5 minutes later I had all of the chorus lyrics in the voice memos of my phone. When I made it home that night I discovered how well the chorus I had written fit together with my original idea of “I would do anything for you” from a year earlier. As soon as I put those two pieces together the song really came to life and by the end of that night I had it finished. It was really a therapeutic thing. I had a lot to say that night and I was lucky enough to be able to get it all out so I could sleep. Always a pretty magical experience when a song comes together that way.

I chose to make a video of “In My Arms” mostly for timing reasons. It was the second single to be released and I knew I didn’t want to make my fans wait too long to see a music video. The real intimate nature of this song also made it an easy choice. It was the kind of thing where I felt like we could capture a very authentic version of me on camera.

2. What was the inspiration behind the video (visuals, storyline, etc)?

The song felt so intimate to me that I wanted whatever video we made to capture that same feeling. When I really started to think on it, this kind of performance video was the only thing that made sense. Having any other characters in the frame, or too much going on visually would have detracted from the intimacy. When I started to identify shot ideas with Jeremy (director), there were two videos we used as reference points. The first was Labrinth’s “Jealous”, and the second was John Mayer’s “Daughters”.

3. What was the process of making the video?

The whole thing went pretty easily once we decided on a concept. Jeremy Stuart (Director, Camera 1), Sam Rawlins (Camera 2), and I, all piled into my little home studio one morning and knocked out all the filming in about four hours. Since this video was so simple, we tried a lot of different little ideas to milk as much emotion out of the performance as possible. Some of them worked out great, which is what you see in the final product. Others, we found in editing, didn’t work out so well. The goal throughout was really to make something that felt like an authentic representation of me, so any shots that felt too forced or that didn’t come across as genuine Simon got tossed. Jeremy and I went back and forth on four different versions of the video before dialing it into the way you see it.