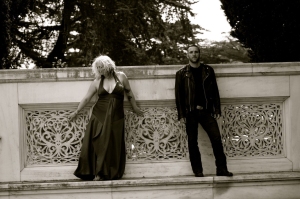 SIT KITTY SIT “BIRMINGHAM”
https://soundcloud.com/sitkittysit/10-birmingham
San Francisco’s SIT KITTY SIT is Kat Downs and Mike Thompson. The duo, who create an undeniable pop/proggy piano and drum sound, has been described as Dresden Dolls mixed with King Crimson, & Fiona Apple.Following their initial debut EP, The Push, in September of 2010, SKS became known for consistently thrilling audiences with their energetically intense live performances. No holds barred, this group produces addictive rock n’ roll – with only two people, and not one guitar in sight.

February 2012 saw the release of their much anticipated sophomore album, Beautiful/Terrible, on the former independent label, Gun Horse Records. Following local and regional touring, 2013 saw the first national tour for the duo as well as the release of their second full-production music video, “My Beloved”, in April 2013.

2014 unleashed the release of Sit Kitty Sit’s third studio album, Everlasting Fire.  Based entirely on Dante’s Inferno, this storyline album showcases the extensive versatility of Downs and Thompson as a team.  Spanning seven genres and boasting 15 guest artists, the May 2014 release shows us an entirely new side of Sit Kitty Sit while maintaining their identity.  The duo will be touring extensively in the U.S. for the duration of 2014.